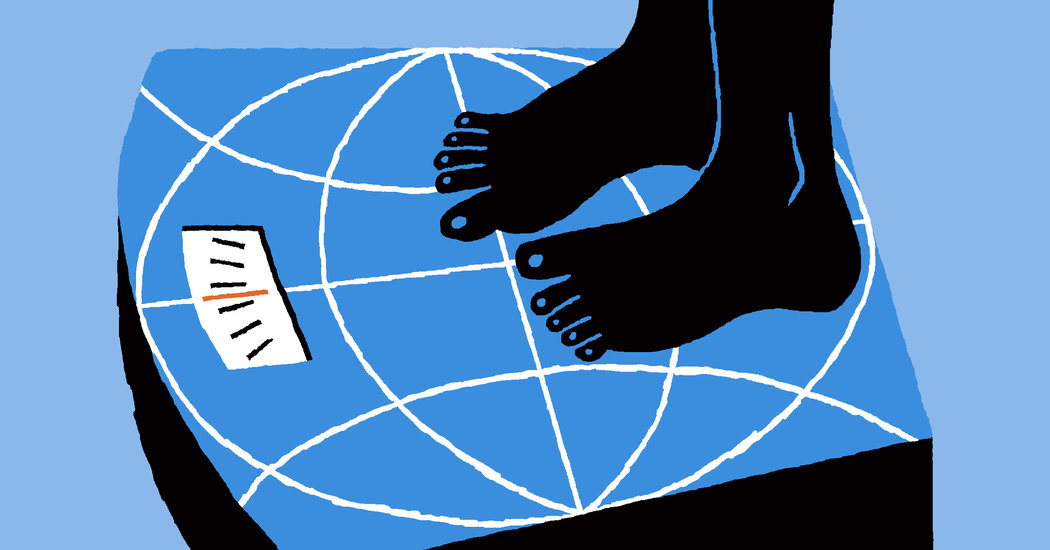 Most diets fail. They fail mostly because after a period of bingeing (for example, New Year’s Eve) we set unrealistic goals for reforming our bad ways. In time, self-control breaks down and we hunger to throw open the cupboards and binge again.

The same is true of the American carbon diet. After a period of bingeing (say, the last century), the United States is per capita the most prodigious emitter of carbon dioxide among the world’s top 10 economies. The average American generated around 15 metric tons of carbon per year in 2016, according to the International Energy Agency, using what it says is the most recent data available. Svelte France, by comparison, weighed in at 4.5 tons per capita, while Indians put out just 1.6 tons each.

To bring the planet to climate equilibrium would require a global per capita goal that falls halfway between France’s and India’s outputs, three metric tons, by 2050, according to a United Nations report from 2011. All of this may make the conscientious American want to drive the family S.U.V. into the nearest body of water and subsist on locally grown radishes. But I am fairly certain that as with food regimens, an extreme carbon diet will falter, and practitioners will soon retrieve their S.U.V.s and cheat so often with hamburgers that those local radishes will molder in the vegetable crisper.

But some diets do work. They tend to be modest in their goals, incorporating minor changes over long periods. That we need to transform the roots of our economy is unquestionable and something that must be fought for with intense social and political commitment.

Yet inertia abounds. Not every well-meaning American will engage in a protracted political struggle. Fortunately, there are smaller maintainable changes that would allow carbon couch potatoes to go from carbon obese to just carbon overweight.

Here then is something of a grocery list for the politically inert, things that can be done without a whole lot of effort that will lead to a carbon-slimmer 2020:

Have the chicken. Much has been made about the climate benefits of going vegan. If we switched to a vegan diet, we could cut our carbon dioxide emissions by 0.3 to 1.6 metric tons per person per year. I have made this change, but I doubt I could persuade a large portion of the country to choose pea protein over pot roast even when packaged as Beyond or Impossible meat.

For the legume-averse, chicken is relatively low impact. According to a study published by the nonprofit Environmental Working Group, beef can require more than 27 kilograms of carbon dioxide per kilogram of meat eaten (much, much more if you compare foods based on protein content per unit of weight). A kilo of chicken, however, costs the planet about 6.9 kilograms of carbon dioxide. True, it’s not tofu (2.0) or lentils (0.9), but most red-blooded Americans know how to cook it.

Or the fish. Fish and shellfish can make for surprisingly carbon-dioxide-light meals, though not everything from the sea shrinks one’s emissions waistline. America’s favorite seafood, shrimp, can far exceed chicken and even rival pork. At the same time, a kilogram of most American-caught finfish, like the Alaska pollock, used for McDonald’s fish sandwich, comes in at a tofu-besting 1.6 kilograms of carbon dioxide emissions. And depending on how you adjust for nutrient content, some varieties of farmed mussels can cost us just 0.6 kilograms of carbon per kilogram of mussel meat. Take that, lentil!

Do nothing better. Busy Americans fret about actually having to do something to address the climate crisis in their already hectic lives. But doing nothing better can add up to something. A 2018 study in the journal Nature notes that tourism accounts for about 8 percent of global greenhouse gas emissions. Just one long-haul flight emits around a half-ton of carbon per person or a full ton of greenhouse effect if one considers other gases a jet puts into the upper atmosphere. Business and first-class air travel generates three to four tons of carbon per long-haul flight because of the extra space those fancier seats take up.

So doing nothing at home for your next vacation is an easy choice. Other better nothings include turning off your car rather than letting the engine idle, which accounts for about 30 million metric tons of carbon dioxide emissions in the United States a year.

Change the way other things in your life do nothing. Similarly when your appliances do nothing, they are often still burning fossil fuels. Standby power accounts for 4.6 percent of residential carbon emissions. Address this by turning off your internet router at night, shutting down your computer, unplugging your cellphone when it’s fully charged and choosing appliances that have low standby power requirements. To go beyond saving standby power, Karl Coplan, the author of “Live Sustainably Now,” suggests “depriving fossil fuel companies of their sales revenues by switching to a renewable-electricity contract and upgrading to an electric car the next chance you get.”

Be really lazy and drink from the tap. What could be lazier than shuffling to your own sink and pouring yourself a glass of water? And yet nowadays we often replace this most low-effort of American habits with driving to a store and buying a plastic bottle of water. This can end up costing us significantly more in carbon dioxide emissions than drinking water from the tap, according to one 2009 Italian scientific analysis.

Ditch the car one day a week. Collectively Americans drive more than three trillion miles annually. (Over 10 years that would take us all the way to Alpha Centauri, the closest star system to Earth.) That comes out to about 4.6 tons of carbon per vehicle a year, according to the Environmental Protection Agency. Transportation is the largest single contributor to American carbon emissions, the agency says. So skipping a day of driving each week would significantly decrease an individual’s contribution to emissions.

Upgrade a forest instead of your phone. A smartphone does not carry a huge carbon burden. Apple reports that a single iPhone 11 results in the emission of about 70 kilograms of carbon dioxide emissions over its life cycle. But if you donated the several hundred dollars you typically spent on a phone upgrade to a program managing a carbon-sequestering ecosystem, you could shave a much greater portion of carbon from your budget. For the best possible carbon sequester, consider the mangrove. Mangrove forests are one of the world’s most powerful carbon sinks; those in the Amazon store twice as much carbon per acre as the region’s rain forests.

Divest from fossil fuels. All of us are implicated in the carbon economy through our daily financial transactions. The headline of a recent New Yorker essay by the climate activist Bill McKibben read, “Money Is the Oxygen on Which the Fire of Global Warning Burns.” How to address this? “Switching to a fossil-free index fund is a no-brainer: Among other things they’re outperforming the market,” Mr. McKibben wrote me recently.

For those who don’t invest but do own a credit card and a bank account, Mr. McKibben suggested going a step further. “As we approach Earth Day at 50, cut up your Chase card or move your money to a new bank — JPMorgan Chase has become by far the largest funder of the fossil fuel industry.”

Here lies the truly profound global effect of the carbon-obese American economy, according to data compiled in a recently released “fossil fuel finance report card” by a group of environmental organizations. Four of the world’s five largest institutional investors in fossil fuels are banks headquartered here in the U.S.A.

Paul Greenberg is the writer in residence at the Safina Center and the author, most recently, of “The Omega Principle: Seafood and the Quest for a Long Life and a Healthier Planet.”

The Times is committed to publishing a diversity of letters to the editor. We’d like to hear what you think about this or any of our articles. Here are some tips. And here’s our email: letters@nytimes.com.

The best diets for long-term health, according to new study – Yahoo Style